Read here.
The world’s leading inspection, verification, testing and certification company, SGS, decided to make test on the new tablet STU 530 (Wacom product dedicated to signature and digital content) and… Why I wrote in engly. Hop, I just need to copy and paste the entire list of test.

The Task to SGS:
The task for SGS was to stress the sign pads with a greater number of signing cycles to check for the possible impact on the surface of a pad.
The investigation was on the roughness of the surface. Investigation should be done with appropriate methods at predefined stages of the simulation test as well as afterwards.
The tests should be performed using a Wacom STU-530 Signature Pad which had been delivered to the SGS laboratory in Dortmund, Germany.

Applied investigation methods:
Photographic documentation of the sample and the sample’s surface
Setup of a mechanical test environment mimicking the actual signature process by writing vectorized electronic signatures on the pad, consisting of lines and circles and being placed in different and varying positions of each sign filed. The load exerted on the pen was about the same as if a real person would sign.
Confocal Laser-Scanning-Microscopy to detect a possible degradation of the surface as compared to the initial surface condition. This is done three times, at the beginning, in between and after completion of the tests.

Results:
On the load of 500.000 signings there are no scratches, visibly by naked-eye. Only with optical microscopy very small mechanical influences were shown.
Confocal Laser-Scanning as described above confirmed the findings above.
Pictures taken by a digital camera show a surface that can be compared to the initial state of the tablet with one exception only.

Resumee:
The endurance test performed by SGS made the proof, that the hardened glass surface of Wacom´s STU-530 signature pad is capable to take 500.000 signatures with nearly no visible wear, which is unique in the market. The amount of signatures reflects a 20 years´ lifetime, taking 100 signatures per working day as an average. The long, maintenance-free lifetime of Wacom signature pads secures a solid and quick Return-on-Invest for our customers. 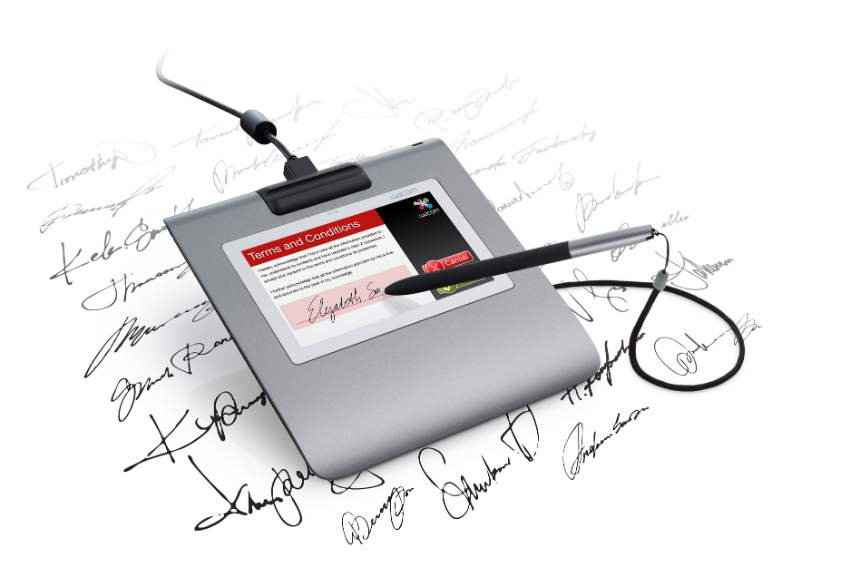